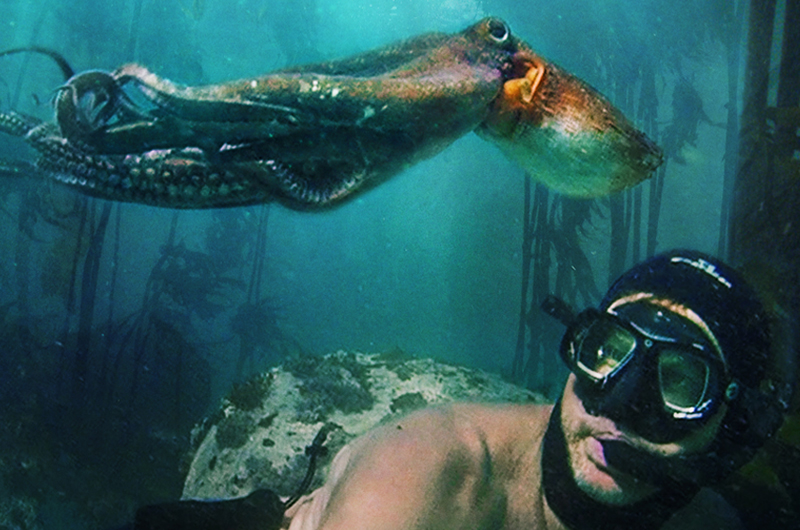 Welcome to ‘Notes from The Edge’, my blog, as it were, and in this first entry in my virtual ‘notebook’ I want to write about a wonderful film I saw last night called ‘My Octopus Teacher’, available on Netflix.

Last night I watched a wonderful film: ‘My Octopus Teacher’ – available on Netflix. I don’t often rave about films, but this one is extraordinary in many ways. For a start, I learned so much about a creature that is so different from us, or appears to be so. But one thing I’m learning fast is that if you pay attention to something – if you’re really interested – you realise that not only is it unique, but also that there’s common ground between it and you. There’s always common ground; there has to be, because we are just one species amongst innumerable species on planet earth; we have a common mother-planet. This female octopus is highly intelligent (on a par with the primate family), resourceful, courageous and capable of great trust and tenderness. The documentary follows her life, which only spans a year, as seen through the eyes of film-maker and diver, Craig Foster.

But the film is much more than just a wildlife documentary. It’s about the relationship between Foster and the octopus: how it’s possible to make a deep connection across what usually seems to be an un-crossable divide between us humans and the rest of the more-than-human world. This is achieved without sentiment, cliché or anthropomorphising the octopus, and touched my heart deeply.

The film took ten years to make. Narrated by Foster, he describes how, back in 2010, he was in a low state of energy and mood and, instinctively, turned to his love of the sea and freediving, to find his way through the impasse he felt he was in. He begins to explore the beautiful, cold underwater kelp forest at the tip of South Africa. He encounters the young octopus and begins to visit her every day, observing the minutiae of her life. Out of this acute observation over the period of a year (her life-span), a bond develops between them. The octopus learns to trust this strange human who becomes familiar and, in turn, Foster feels an extraordinarily intimate connection with the octopus, as he experiences how she hunts, finds shelter, defends herself against the numerous pajama sharks for whom she is attractive prey, and how she moves through her world with chameleon grace and ingenuity.  Inevitably, her year draws towards its end and her eventual death, after her eggs have hatched.

The film is full of moments of wonder and excitement as we witness the underwater life of this amazing creature but, for me, what made this film particularly powerful was the bond between man and octopus: the way she slowly learns to trust him, and the way he allows himself to feel love for her. He acknowledges this without embarrassment or defensiveness, and that touched me so much. Foster is a scientist, but that doesn’t stop him loving this animal he’s observing. For me, this is fundamental to how we, as a species, have to re-learn our relationships with the rest of the planet.

It’s assumed that scientists have to be ‘detached’ in order to be effective in their work. But I think it’s possible to be scrupulous in ‘not interfering’ (and there are several points in the film where Foster wants to interfere very much in order to help her – but doesn’t), and, at the same time, to love what you’re observing. As a species, we have, by and large, lost our collective capacity to love ‘the other’ that is not human. We might love bits of it selectively, but our disconnection runs deep, and it is this that permits us to abuse and exploit and be indifferent to how our behaviour is plundering and destroying the complex systems of life, upon which we depend, for our continued survival on Earth.

Foster loves the octopus he gives a year of his life to, and, in turn, the octopus trusts him and allows him access to her life. That is an extraordinary gift. As he witnesses her recovery from a shark attack, the experience shifts his own sense of ‘lostness’; her resilience helps to ignite his own process of healing.

A film so worth seeing – I recommend it to you. After watching it, it was quite hard to sleep that night. Moments from the film kept running through my mind and one thought kept returning to me. This was one octopus: one man. One encounter. Imagine: how many extraordinary lives we never know about happening, right now, all around us. The separate, extraordinary lives of every marine creature, every terrestrial creature, every bird, every insect. The extraordinary life going on, underground, in every forest. Imagine if each one of us had access to just one of those creatures for a year – built a relationship, invested time, energy and love into that connection – how much we would learn, how much we might change. The world is brim-full of extraordinary lives happening right under our noses, and we don’t know about them – will never know about them. So many lives, so many stories. So much teaching out there, potentially available to us. It brought home to me how little we know: we, who consider ourselves so clever, so sophisticated, so knowledgeable, so advanced. Yet, we’re the only species intent on destroying ourselves …..

I think I slept in the early hours, and woke to high winds and the remnants of a storm passing over. This wasn’t enough to deter me from my swim in the sea: something I do almost every day. I too have a love-affair with the sea and am probably happiest in water; I really resonated with Craig Foster on that score. But, unlike him, the waters where I swim seem to be largely denuded of marine life and I have a ritual at the end of every swim, where I dive down to pick up as many plastic fragments as I can, and stuff them into my bathing costume before I get out. It’s a tiny way of saying ‘thank you’ to the ocean I love so much, which is home to so many remarkable, magnificent animals.

exactmedia_i06rqw2020-11-09T20:08:06+00:00
We use cookies on our website to give you the most relevant experience by remembering your preferences and repeat visits. By clicking “Accept”, you consent to the use of ALL the cookies.
Cookie settingsACCEPT
Manage consent

This website uses cookies to improve your experience while you navigate through the website. Out of these, the cookies that are categorized as necessary are stored on your browser as they are essential for the working of basic functionalities of the website. We also use third-party cookies that help us analyze and understand how you use this website. These cookies will be stored in your browser only with your consent. You also have the option to opt-out of these cookies. But opting out of some of these cookies may affect your browsing experience.
Necessary Always Enabled
Necessary cookies are absolutely essential for the website to function properly. This category only includes cookies that ensures basic functionalities and security features of the website. These cookies do not store any personal information.
Non-necessary
Any cookies that may not be particularly necessary for the website to function and is used specifically to collect user personal data via analytics, ads, other embedded contents are termed as non-necessary cookies. It is mandatory to procure user consent prior to running these cookies on your website.
SAVE & ACCEPT
error: This content is protected !!
Go to Top